Traditional Rajputi bangles are of different types such as 'bangadi', 'gokharu', 'gajara bangle', 'pahunchi or ponchi', 'pacheli'. Many jewellers and sources use the terms interchangeably but traditionally, all the styles were quite distinct as illustrated below.

"Bangadi / Bangdi" are a special kind of (set of two) bangles worn by Rajput women on their weddings. A bangadi is a round bangle with thick lining and small round gold protrusions all around it which makes it quite wide in diameter as shown below. Note that the gold protrusions must necessarily be shaped like a round ball and affixed exactly in the manner shown below. Furthermore, the bangle must not have a clasp or it would be a bangadi like kada and not a traditional bangadi bangle. Unmarried Rajput women do not generally wear a bangadi (they may wear gokharus, paunchis or other styles) as it is generally gifted to a woman on her wedding. 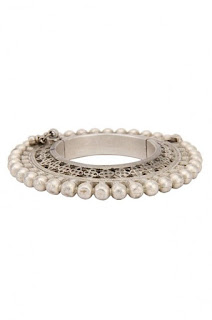 A 'Bangadi' bangle
Source: Pinterest
Since the independence, a combination of plastic and gold became very popular in Rajasthan. Many  bangadis were manufactured in the style shown below: 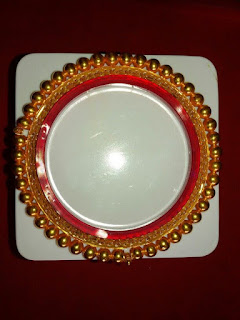 However, many variations of bangadi are available these days. For instance, many jewellers experiment with the protrusions and use a combination of gold and diamond as well. Modern style bangadis are commonly referred to as 'Pacheli' bangles erroenously (see below).

Gokharu style bangles:  A 'gokharu' is a kada style bangle which is much smaller in diameter but thicker than a bangadi. Furthermore, it has large cubical gold protrusions (as against small round balls in a bangadi).

Difference between a 'Gokharu / Gokhru' and a Bangadi: 'Gokharu' style bangles and bangadis are not similar at all. Much smaller in diameter and look, a gokharu (see image below) can hardly be confused with a bangadi 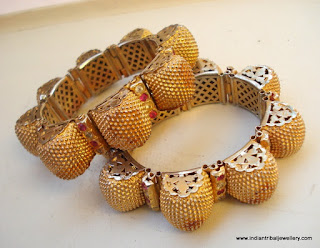 Gokharu bangle
(It is not made of white pearls. If white pearls are used, it is known as 'Gajara' / 'Gajra' bracelet)
Source: Pinterest 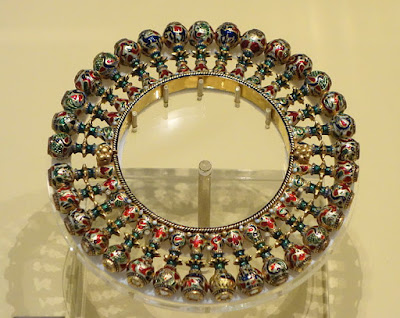 Variation of Bangadi aka Pacheli  (see post below)
This image is of an anklet but can be used to illustrate modern Pacheli style bangles
Source: Wikimedia Commons [By Daderot (Own work) [CC0], via Wikimedia Commons]

The picture shown below shows both traditional bangadis and a gokharu. The woman is wearing two bangadis (two outermost bangles) and one thick gold Gokharu bangle. 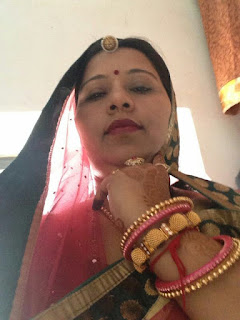 'Gajra' / 'Gajara' bracelet or bangle: A gokharu bangle made of pearls is known as a 'Gajara' or 'Gajra' bracelet. Jasmine flowers worn in hair  are known as 'Gajra'. The pearl gajara bangle / bracelet derives its name from the string of white jasmine flowers.

Difference between Gokharu bangle and Gajara bracelet: Note that unless made of white pearls and with protrusions as shown here, the bangle / bracelet would not be called a 'gajara' / 'gajra' bangle but 'gokharu' instead. Given below is a gajara bangle. 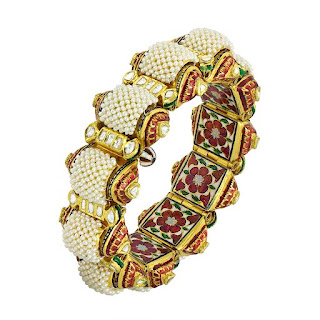 The image shown below shows a modern bangadi (outermost bangle) and gajara bangle. 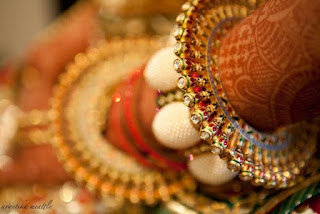 'Pahunchi' 'Paunchi' bracelet: A paunchi is a bracelet (not a bangle) in the form of a rakhi. It consists of small gold protrusions of a bangadi (not of gokharu) embossed to a rectangular base wide enough to cover the upper wrist. It is tied by two threads to the wrist is therefore, neither a bangle nor a kada. 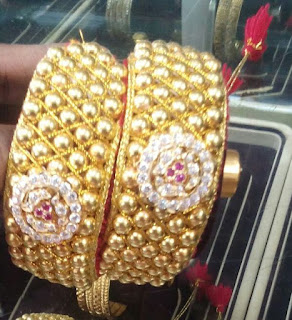 Paunchi or Pahunchi (rakhi style jewellery: not to be confused with kada, bangle or bracelet)


Pacheli bangle: A pacheli bangle is a combination of a bangadi, gokharu and sometimes even ponchi. It is a a kada style bangle with a clasp. it is much smaller in diameter than a bangadi. Furthermore, the round gold protrusions are not present. Instead, diamond, pearl or combination protrusions adorn the outer circumference of the bangle. However, many jewellers erroneously refer to modern style bangadis as pacheli. 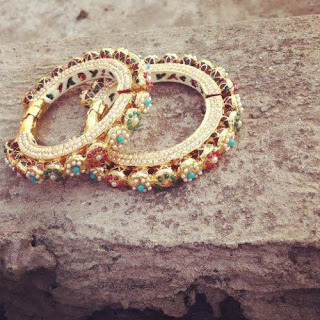 As stated above, combination of traditional styles are also available these days and are referred to as 'Pacheli' and erroneously even as 'bangadi' or 'gokharu'. Shown below is a bangle which is a variation of bangadi: It is actually a combination of a paunchi (it is tied with a string) and gokharu (large protrusions instead of small gold ones). 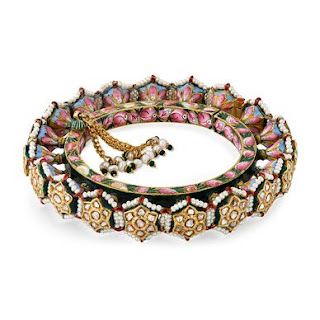